Bill, Mark T and Richard joined Geoff for a 12.5 mile walk from Berkhamstead. They passed though Little Gaddesden lunching at the Bridge Water Arms then returned to Christmas cake and mince pies at Geoff's house.

Geof, Mark Tingley and Mark Smith were met at Brighton Youth Hostel by the organiser, who was last to arrive, having been caught in a traffic jam on the M25. We drove up to the car park near the pub cum restaurant, formerly known as the Devil’s Dyke Hotel, to start a circular walk. The view from this point is spectacular. On the Devil’s Dyke Road we were stopped by a police car: not because of Geof’s driving, they were just looking for a riderless horse. In spite of the dire weather forecast, Saturday was a pleasant day, with some sunshine. We took the South Downs Way via Saddlescombe to Pyecombe, stopping at The Plough for lunch. We then walked over Wolstenbury Hill, taking in a fine view of Jack and Jill windmills at Clayton, which Geof photographed. We then returned though low lying and soggy fields via Poynings, and took the steepest route up the escarpment back to the car park. Geof departed for home, while the rest of us went to the hostel. Patcham Place is a Georgian style house with eccentric heating arrangements. The staff were friendly, if a little disorganised. Sunday morning was very wet, so we decided to go into Brighton to visit the Royal Pavilion, where we were greeted by the Prince Regent, or rather, an actor dressed up in period costume. At mid-day, Mark Tingley decided to forego further exercise and headed home, leaving Mark and me to do a short circular walk from Clayton up onto the Downs, and back via Keymer. First, though we took the precaution of building up our spirits by a visit to the Jack and Jill pub [g.r.TQ298142], which was doing a roaring trade. The rain had stopped  by this time, but the tops were in low cloud, and the fields below were so sodden that in places the water was almost over our boots. We headed home at 4pm.

This had to be abandoned because of footpath and hostel closures caused by the outbreak of Foot & Mouth Disease.

Bill organised a highly successful visit to the Barbican to see Sheridan’s comedy ‘The Rivals’, featuring Wendy Craig and Benjamin Whitrow. Everyone said they enjoyed themselves.

Easter trip to Shropshire 13 to16 April

No country walking this Easter on account of the Foot and Mouth disease but since we had fortuituously chosen Ironbridge as our hostel we were able to spend our weekend visiting the cluster of museums located along the gorge of the River Seven which is considered to be place where the industrial revolution started. Despite the industrial history there is little sign of manufacturing here today. There is one remaining factory where the famous 'Aga' range of kitchen stoves are produced but apart from that it is a tourist area set in pleasant countryside with just the museums as a reminder that this gorge was once the world centre for air and water pollution. Abraham Darby moved his revolutionary coal fuelled iron smelting business here in the early 1700's primarily because this was one place where you could mine coal, iron and limestone all in one spot. In the days when transport of heavy bulk materials was so labourious it was a crucial advantage to have the raw materials for iron smelting all to hand. At that time there was more iron produced here than anywhere else in the world but by the mid 18th century industry had moved on and the area was already in decline as new industrial centres grew up around the extending canal system, or was it the other way round. The river Severn was navigable but with difficulty due to the strong current and uncontrollable flooding and a proposal to improve it for navigation was never acted on.

On Saturday we went to Blist’s Hill Museum to see the Victorian Town, where, for the amusement of tourists such as ourselves, a pretend marriage was due to take place enacted by people in period costume. This was enlivened by one of the bride’s pretend relatives who made his disapproval of the groom very public. The reconstructed town has become quite extensive with its own bank, chemist, baker’s shop, milliner’s, etc. Geoff took a professional interest in the local printer who was attempting a demonstration, and plied him with questions. Rides were offered in a horse and carriage or a Ford model T (this hardly the same period as the rest of the theme) We had a very entertaining time and spent most of the day there. On the way back Geoff, Doug and I looked in at the Tar Tunnel, which has a natural supply of bitumen.

On Sunday we went to see the Iron Bridge (above with HSC member in foreground), built by the ironmaster Abraham Darby III in 1779, and still open to foot traffic and cycles. After this we got split into two groups, some visiting the Museum of Iron and others going to see the restored Darby Houses and the Quaker Cemetery. We walked back along the east bank of the Severn stopping at the Tile Museum. 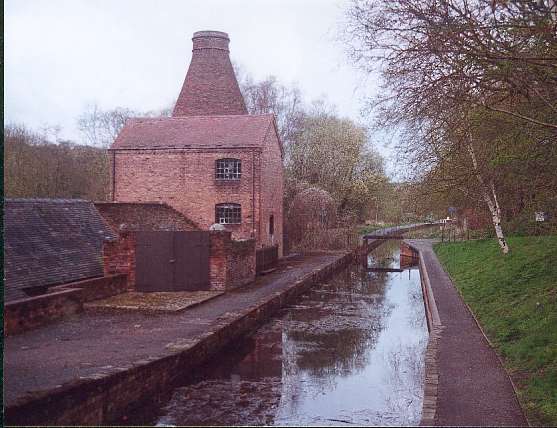 On Monday we looked at the China Museum, two pictures above. The brick built structure in the form of a huge bottle is a kiln. The museum staff show you inside and you find that the elegant bottle is just an outer shell within which is an inner brick built structure which contains the coal burning hearths and the stacks of pots to be fired. I think that the main function of the outer structure with it's elegant shape is to create a draft which funnels the exhaust away from the top of the inner kiln.

After viewing the china museum we headed home but stopped on the way back at Daniel's Mill near Bridgnorth. Geoff was especially keen to see this old water mill which is recorded in Domesday Book, and is still producing flour. The current miller gave us an entertaining tour. The mill has been in his wife’s family for nearly 200 years. After coffee and scones baked with homemade flour, we made our way home.

The iron bridge museums have a WEB SITE HERE

As usual our fitting out supper was held at the Mission Hall in Paglesham. Both club boats were launched during the day. There was some difficulty in rowing the Wayfarers out from the hard to the moorings since a sudden squall came over and one boat missed the moorings and ended up drifting down river unable to row back against the ebb - a passing motor cruiser gave assistance - not an impressive start to the sailing season but never mind! A very satisfying buffet was organised by Grace, Josephine and Christina. After the supper Christina showed us some slides of her trip to Petra.

Restaurant Meal in London - 29 May

After a great deal of discussion about type and price bracket of restaurant we went for a meal at the cafe of the Shakespeare's Globe Theatre at Bankside. Because of the evening performance the cafe was empty and we had almost exclusive attention of he waiter. We enjoyed a pleasant evening with lively discusion of life in general and planning for the forthcoming new members sailing weekend.

We introduced a couple of prospective new members over the weekend. I sailed on the Saturday and since the wind was light we sailed up the Roach rather than going to Burnham, the later possibility seeming to incur too much risk of being becalmed with an ebb tide on our return. John Langrick sailed up the river with us in Swanti and when we reached the little creek which turns up towards Stambridge village John anchored and we all ended up aboard his boat drinking his refreshments, hope we can return the hospitality sometime. Later in the afternoon we carried on up to the head of the river and went for a short stroll. Walking round the back of a boatyard we came across the club house of the Wakering Yacht Club, I had not noticed this before. So there are three sailing groups on the Roach to the best of my knowledge, the HSC, the RSA and the WYC which we were told relocated from Wakering a few years ago.

For the first time in a number of years we organised a joint activity with another local group. Three members of Chelmsford group sailed with us up the Roach to the Cherry Tree PH where we joined several other members of that group who had walked there from Paglesham Church End. We then invited those who had not sailed on the way up to sail back but only one took up the offer, the others walked back. I have a sneaking suspicion that it might have been the sight of the Paglesham mud which mainly discouraged them? The sailing party were slower than the walkers on the way up to Rochford, mainly because our boats ran into shallow water near the head of the Roach so we had to wait for the tide to rise a bit further. On the way back down with the tide starting to ebb and a following breeze the boats easily raced the walkers who also had to detour around the bends in the seawall footpath. A successful event and perhaps we could do more to promote this kind of joint group activity, with Chelmsford Group and/or other local YHA groups.